Nearly a quarter of stroke patients will experience what is called vascular dementia. This condition, which is more common in men than women, is also associated with Alzheimer’s.

Vascular dementia impairs the brain’s ability to think. It is caused by a lack of blood flow and is considered incurable. Medications help prevent it from happening or slow down its progress.

Marijuana and CBD oils are an alternative to traditional vascular dementia medications. Unlike other medications, these natural remedies do not cause dangerous side effects. This article explains how cannabis helps slow down the progress of vascular dementia.

What Is Vascular Dementia 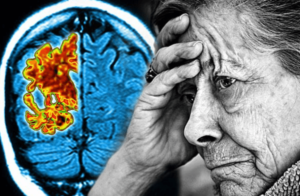 According to the Alzheimer’s Association, vascular dementia is a decline in brain skills related to thinking. It’s caused by other conditions which reduce or block the flow of blood to the brain. The brain cells of those who suffer from this form of dementia are deprived of vitally needed nutrients and oxygen.

Inadequate blood flow causes damage to other cells within the body, eventually causing them to die off. This leads to drastic changes in thinking skills.

When the vessels responsible for supplying the brain with blood become narrowed or blocked, vascular dementia occurs. When the supply, which carries oxygen to the brain, is cut off suddenly, a stroke can occur.

Two common conditions are known to lead to vascular dementia:

1. Stroke – Suffering a stroke can cause a brain artery to become blocked. Even if symptoms of the stroke itself aren’t noticeable, it can still lead to significant damage, increasing the risk of dementia.

2. Brain Blood Vessel Damage – Any condition that leads to the chronic narrowing or damaging of blood vessels may result in this form of dementia. Experts suggest everyday “wear and “tear” related to normal aging may be a major factor.

Some can suffer from multiple “silent” strokes. As these build up over time, various types of physical and mental disabilities may result. Getting control over risk factors may help to curb vascular dementia altogether. Some of these risk factors include:

Catching this form of dementia early on can help to limits its severity and impact. Early detection may be key to prolonging the full onset of the disease.

According to the Alzheimer’s Association, the severity of the damage to the blood vessel and the part of the brain affected determines the symptoms of vascular dementia suffered. When symptoms occur right after a stroke, they are very noticeable. In other cases, the patient should be monitored for these symptoms, which include:

For those suffering from symptoms of vascular dementia due to a stroke, there are other noticeable signs to watch out for, including:

Various conditions affect nerve fibers and blood vessel located deep within the brain, such as multiple small strokes. These conditions cause gradual changes in the way the sufferer things, while the damage continues to accumulate.

Some of the most common signs that a patient is in the early stages of vascular dementia include:

There is currently no cure for vascular dementia or a way to reverse the damage it’s already been done. However, vascular dementia treatment can help prevent more damage to the brain, or at least slow the disease’s progression down.

In most cases, physicians will recommend prescriptions drugs to treat the symptoms caused by this disease, such as:

Critics of dementia drugs believe the cholinesterase inhibitors tend to cause dementia patients more stress than relief. They also induce such side effects as fainting and severe diarrhea. Not only can this lead to dehydration and other dangerous situations, but it could also cause the patient even more stress, leading to depression

This neurodegenerative disorder is incurable. It’s caused by the brain getting an inadequate supply of blood, which leads to the lack of nutrients and oxygen to the brain. Doctors often refer to this condition as chronic cerebral hypoperfusion. Over time, the sufferer will have to deal with cognitive impairment and overall dementia, as the brain continues to die.

This study, which was published by the National Institute of Health, shows the effects of activating the cannabinoid receptor CB2. Researchers found that this helped to get the blood flowing to the brain properly, as well as assisting with memory and learning capabilities. Activating CB2 receptors helped increase activity in brain cells while reducing cell damage within the brain.

Another study on CB2 receptors and vascular dementia was published by the Current Neurovascular Research Journal. Researchers found that activating the CB2 receptors helped to treat the symptoms of dementia in animal research patients. When cannabis is introduced to the body, these receptors are activated naturally.

Researchers reported that vascular dementia, generally associated with the onset of Alzheimer’s disease, is generally found in aging seniors. Chronic cerebral hypoperfusion (CCH) was found to be suffered by most patients with this form of dementia.

A study conducted at India’s Amity University Uttar Prades shows that when CB2 receptors were activated, CCH issues were lessened greatly. They conclude that these receptors may help to restore or benefit, cognitive impairment, as well as vascular dementia.

Another study, published in the Journal of Alzheimer’s Disease takes it even further by exploring the effects of both cannabidiol (CBD) and tetrahydrocannabinol (THC) on dementia. They found that both compounds, which are found in the cannabis plant, helped treat dementia during early stages and later stages.

According to research conducted by Complutense University and the Cajal Institute in Madrid, medical marijuana may help stall a patient’s decline due to Alzheimer’s disease. The active in cannabis helped to reduce inflammation on the brain, caused by Alzheimer’s, and in theory, other such diseases that lead to dementia.

Previous studies conducted show that medical marijuana, specifically the CBD it contains, can effectively treat dementia caused by Alzheimer’s disease. When combined with low levels of THC, CBD was shown to decrease the buildup of tangles and plaques associated with Alzheimer’s, as well as lower amyloid-beta levels. Cannabinoids were also shown to help protect the health of the brain by providing neuroprotective effects while enhancing mitochondrial functions.

Research shows that both THC and CBD have the ability to help treat vascular dementia caused by various brain debilitating diseases such as Alzheimer’s disease. However, THC has the capacity to cause the user to experience a euphoric high, while CBD does not. In fact, CBD was found to counter the high effects caused by the THC in medical marijuana.

CBD provides dementia patients with relief from various dementia symptoms, without making the patient high. Therefore, using CBD products which contain zero THC, will allow vascular dementia sufferers to experience relief from brain inflammation, and other issues caused by it while allowing the user to remain sober.

How to Take Medical Marijuana for Vascular Dementia 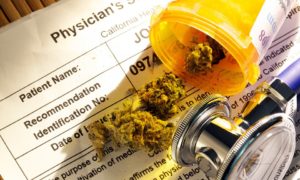 Smoking cannabis is still the most common way to take medical marijuana to treat issues with the brain, such as vascular dementia. Weed smokers roll it in cigars or rolling papers, and smoke it like a cigarette, or smoke it from a weed pipe or bong. Others prefer to “smoke” cannabis using vaporizers, which releases vapors that are 95% smoke-free.

Cannabidiol oils are made from marijuana or hemp. They contain high levels of CBD, so they have the same healing effects as smoking medical cannabis. However, CBD oils have no THC in them whatsoever.

This allows vascular dementia sufferers to benefit from ingesting CBD, without feeling high. These euphoric feelings could lead to more frustration, stress, and depression for the patient who already worries about current memory loss and issues with making decisions, speaking, thinking clearly, etc…

CBD oil gives those with Alzheimer’s and other such diseases affecting the brain a convenient way to take medical marijuana for vascular dementia. Simply place drops on the tongue for quick relief. Other ways to use cannabinoid oil is to add some drops to food, drinks, and various cooking recipes, instead of having to smoke of vape weed.

Growing Your Own Vascular Dementia Medication

You don’t need to be an experienced weed cultivator to grow your own medical marijuana for treating vascular dementia. Finding the right strain of cannabis for your condition is the first step. From there, it’s just a matter of planting and nurturing your medicinal crop.

For dementia patients, we recommend a strain with a high CBD to THC ratio such as —– , this medical cannabis strain helps relieve inflammation, stress, and pain, with a very minimal high.